Armada by Ernest Cline is about Zack Lightman, a high school gamer who is obsessed with games, music and movies, who spends his life dreaming of more sci-fi like world. 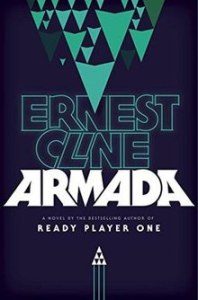 Armada brings with it an abundance of nerdy references that makes my inner geek go wild. It provides an intriguing take on what would really happen if aliens did invade the earth.

There were some great characters in this book that I hold dear to my heart, especially Lex. Her relationship with Zack was pretty adorable but it didn’t abrogate the book if that makes any sense. Not to mention the story was never boring because there were so many different elements to it.

However, the large battle portion at the end seemed to move too quickly and the plot seemed a little unrealistic at certain points like how fast the characters were able to travel in space (not that it is necessarily a negative point). Some scenes moved a bit too rapidly and sometimes they were a little too much to follow.

Other than this, the story was well developed and fast paced. It was overall a fun book, and I would recommend it to all of you geeks and 80s pop-culture lovers out there.