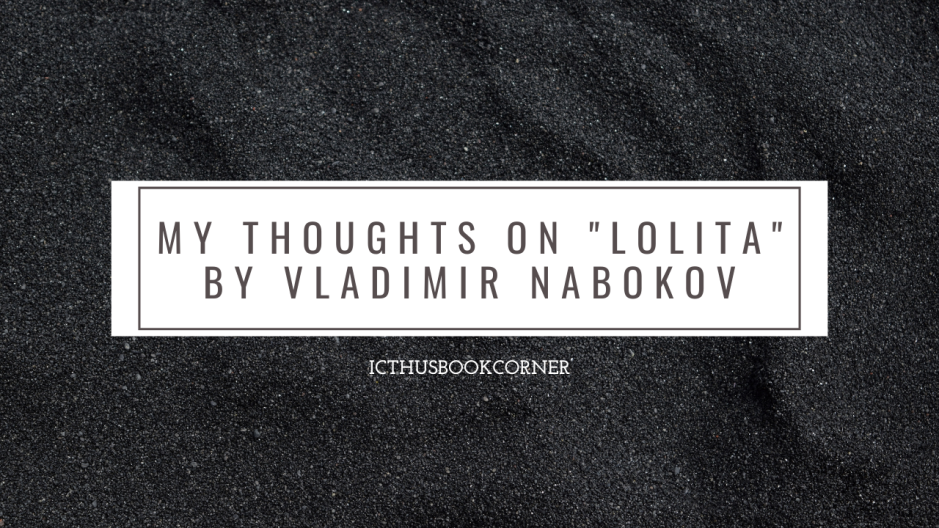 Hey everyone! Today I want to talk about a book that did nothing but worsen my mental state, Lolita by Nabokov.

I’ve talked about this book on my bookstagram (follow me there if you want to follow my readings more closely), and I had a lot of feeling while reading it. This book was published back in 1955, and it is now considered a classic by a lot of people. You probably know it is a book about and from the perspective of a paedophile, Humbert Humbert. It follows him during his middle age as he finds himself obsessed with the nymphet Delores Hayes.

I had been hearing about this book my whole life and knew people either loved it or hated it, so I decided to put it off for a while in fear. Once I finally decided to read it, I went into it with no preconceived judgements so it wouldn’t ruin the experience.

The first thing I need to say about this book is that I loved the writing style, really really loved it. Can we talk about the fact that Nabokov isn’t an English native speaker? I applaud Nabokov’s mastery of the English language. He uses English better than most writers whose first language is English. He is daring with his words; he is pure genius. It is the type of writing I love, you know? It’s poetic, and it’s not sparse, and he uses flowery language.

In the beginning, it was quite tolerable, but as it went on became progressively more upsetting. The first person narration was making me feel sick. Sometimes it physically hurt me to read this book, like someone was squeezing my heart. Never in my life had I read a book that made me this uncomfortable. I’m just glad I’m someone who can enjoy a book and dislike the main characters, otherwise I’m pretty sure this book would have killed me.
Because it’s first-person narration, we are inside Humbert’s head, and the problem is that this person’s head is a terrible place. We have to be beholders of grooming, gaslighting and abuse. Humbert has no redeeming quality, which is both terrible for the reader but the only correct choice. Nabokov created a character that no one could pity because he (Humber) is just a horrifying human being. However, the author was still able to create a multi-dimensional character, and that is not usual and something I appreciate. There is a lot of depth, there is a lot to dig into, I love it.

This book was notably hard to read, but for some reason, I couldn’t stop. One reason for this was, like I said, the writing. Even so, there was something else, something that made me want to know what was going to happen next, something that got me hooked.

The book is divided into two parts. The first one is before the abuse, and it follows Humbert from his pre-adolescent self to when he gets to be a disgusting human to Lolita. The second part accompanies him from the moment the first part left off to when the book is supposedly being written. The first half of the book was much easier to read than the second, most likely because there is a smaller amount of sexual assault.

The only negative aspect of this book, for me, is the last two chapters. The book could have an amazing ending, but, for some ulterior motive, Nabokov decided to go with underwhelming.

To end this, I feel the need to say a few things. First of all, I don’t believe this book romanticizes or glorifies paedophilia. From what I read from the author, and what I gathered from reading Lolita itself, I believe Nabokov wanted to create a reality which the average person wouldn’t have access to. He wrote one of the most brutal accounts of abuse there is. I think this is an important piece of literature, if not one of the best.

Finally, I gave this book 4.5 out of 5 stars. I recommend it to everyone who can get into a story without liking the main character and to whom abuse is not a severe trigger.